A while back we had a leaky shut-off valve on a toilet. That leak led to an amazing modern coastal powder room that I am now completely in love with!

Bear with me here because this is quite a story. It was Thanksgiving and my daughter, her husband, and their two dogs were here visiting. So that was 5 people and 3 dogs in one house.

I found water all over the floor and discovered it was coming from the toilet shut-off valve. So I turned the water off to the toilet and cleaned up the mess.

We still have a home warranty so I rang them and got someone out asap! That’s when he dropped the bomb on me. He couldn’t fix it.

The shut-off valve was soldered on (old school probably from when the house was built) and the part he needed to get to was behind the wood wainscotting and behind the drywall. The warranty company wouldn’t let him touch the wood or drywall.

Not going to lie, I cried. This was the one room in the whole house that didn’t need anything done to it right away. It was in good shape and pretty. And now I had to rip it apart.

This is not a massive renovation, this is more if a mini reno. I really just wanted to fix the wall and give everything a quick coat of paint for a fresh new look. Someday I might change out the mirror and sconces (maybe when I don’t have a kid in college anymore, LOL).

My husband and I did a lot of discussion on how to remove the wood. I knew it was probably glued on and it was tongue and groove so the chances of getting it off cleanly were next to impossible.

I figured after the holidays were over I would deal with it. But I didn’t. I procrastinated because I was terrified of destroying the wood wainscotting.

Eventually, I decided how I was going to do it and ordered a new tool from Amazon. I put it together and put it in the powder room, and then procrastinated some more.

I finally got up the courage and cut a square off the wall around the shut-off valve. It was very hard work, mostly because I had such little space to do it in and I had to do it all left-handed.

In the end, I got the wood off, then called a plumber to fix the valve.

Just a word of advice, if this happens to you make sure it gets replaced with a valve that has a compression nut. Basically, this means that next time you can replace it yourself, and save yourself some cash!

It was now time to put it all back together. I used 3/4 inch plywood to replace the wood I took off the wall (I completely destroyed it). Then I used caulk to mimic the tongue and groove sections and wood putty where the new wood met the old wood.

I will admit, it doesn’t look exactly like it used to but it’s pretty darn close! Plus it’s behind the toilet and no one will ever notice.

The next step is to give everything a coat of fresh white paint.

For the walls, I went through a bunch of options such as stencil, wallpaper, or just paint. In the end, I decided to stick with paint. The color I went with was Sherwin Williams Serious Gray.

It’s a pretty dark color but with all the white in the room, it’s not too dark at all. Its name says it’s gray but it has very strong blue undertones.

I hope you love my new modern coastal powder room as much as I do! It’s now one of my favorite rooms in my home. I thought it was perfect before but I know it is perfect now! 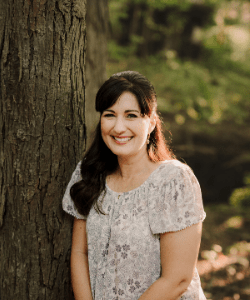